skip to main | skip to sidebar

A RENO AREA FISHING BLOG WITH DISCUSSIONS ON ALL THINGS FLYFISHING 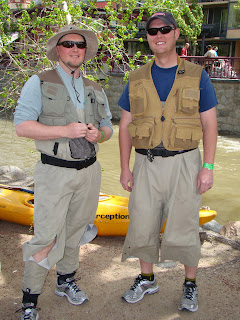 Since flows have been so high across the region and it just won't stop snowing, Team Fly-Swatter decided to focus their efforts on something different--running. The run amuck is a 5 mile relay race (as part of the Reno River Festival) that starts in downtown Reno and continues through Idlewild Park where there are a series of obstacles including hop-scotch, hay bales, a slip and slide, and of course the the infamous mud pit, after completing (and in some cases surviving) this phase of the run, you return downtown. Costumes are mandatory and as a couple of trout bums we had no other options than to represent our sport by wearing waders. This race is truly one of Reno's best events and the River Festival itself includes a variety of great vendors from across the region. We'll see you down there next year. 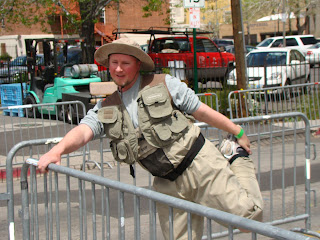 Brett gets warmed up. 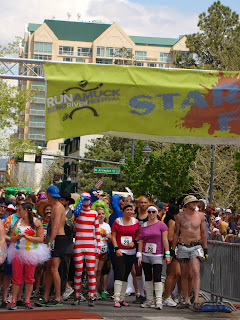 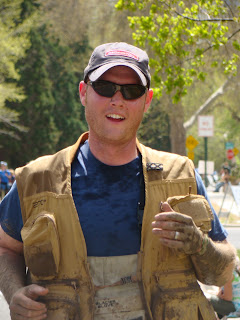 The Run Amuck aptly named Reno's Dirtiest 5K
Posted by SIERRA FLYSWATTER at 9:08 AM No comments:

This spring has been rough for fisherman. Only a handful have been fortunate enough to get on the river during optimal flows, but the few that have-have been rewarded with excellent fishing. I’ve been torn between fresh powder days or Skwala days on my few days off from work. I did finally get my NV fishing license and my wife and I got out for a few hours the other week. What we found was stoneflies, blue wing olives, and midges in abundance - typical of this time of year. Fish were all over the stones, except the rainbow that made my day by eating a dry BWO. Watching a 20” wild bow slurp your fly is something that compares only to sex - at least here in the lower 48. Well, I’m sure there are places in Montana, Idaho, and Wyoming that compare. The Truckee is what we should say - dry, (no pun intended) in the top water action at least. Good luck if you can catch the flows just right for fishing. California side is probably the best bet for now. Flows on NV rose to over 1000cfs as of this writing. Yikes!

Posted by SIERRA FLYSWATTER at 11:29 AM No comments:

THE NETS HAVE REOPENED!

Pyramid Lake got a new fisheries manager and decided the nets shouldn’t be closed as long as they were. This is extremely good news for fly fisherman, or any fisherman for that matter. My dad and I got there on Mon. 4/4 and it was - as usual - awesome! We caught lots of fish. They tend to hit very lightly so keep your attention on your retrieve. This is good news for all, because in my biological opinion Pyramid lake didn’t need any new “management”. The lake and the fisherman (especially at the nets during spawning time) really never kept fish or abused the fishery. In fact, before they closed the nets and turned to barbless hooks catch rates were the highest I’ve ever experienced in my 20 some years of fishing the lake. This led me to not buy an annual license for the following years; and I’m sure others followed, resulting in a loss of overall revenue and angler dissatisfaction. Get out there while you can. Enjoy the pictures. Good luck.

Posted by SIERRA FLYSWATTER at 11:23 AM No comments: 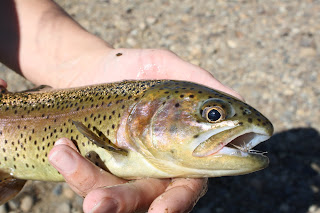 Last October Danielle and I wanted to take time out of our hectic schedules to spend a day fishing together. Since she was 7 months pregnant we needed a spot with some easy wading. The West Carson was the perfect option. With low flows that time of year, we had to be stealthy and patient, it payed off and we had a rockin' day, encountering surprisingly few other anglers and some pretty good dry fly action. 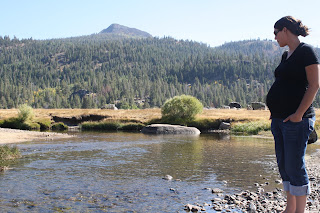 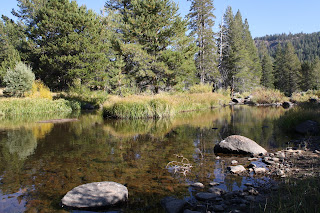 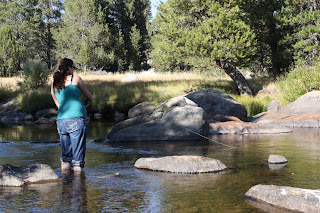 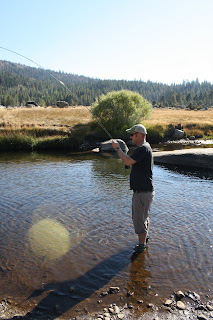 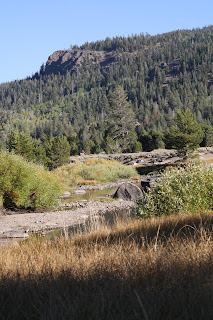 Another Great Day
Posted by SIERRA FLYSWATTER at 2:24 PM No comments:

Check this out! Looks Great Mikey.
Posted by SIERRA FLYSWATTER at 2:15 PM No comments:

A mammalian carcass on the river?

Our recent warm weather has been off the hook! I like to ski so those conditions haven’t been great, but fishing on the Truckee has been awesome. The window to fish is short - mid afternoon to late afternoon, but if you catch it right -- look out. Midges have been key. I’ve hooked into many large trout, including the big flash of yellow/orange, but failed to land that punk ass. Oh well, maybe next time. Rainbows and whitefish have been plentiful, including the occasional dry fly action which, is always a bonus. In fact the last time out I found 2 large rainbows gulping midges on the surface. I put down the first, but managed to hook the next. The little bastard popped off right when I was about to land him, but the fight and initial hook up were well worth the effort. Anytime you can sight and stalk a fish to 20” on the surface is a good day. Here’s a few pictures. Wade safe on the ice, and good luck.
P.S. Pyramid has been pretty good too

Angela and her cutthroat.

Rainbow on the dry.

Whitefish sometimes save the day.

Posted by SIERRA FLYSWATTER at 8:13 PM No comments:

The Wall of Death

From Talkeetna we drove north on the parks highway to meet my brother at Denali National Park. He was able to get a day off at work and meet us there from Fairbanks. We took the full day bus ride up to mile 68 within the park. (the road only goes back ~80 miles) As expected the scenery was breathtaking, and the wildlife was remarkable. We were able to see caribou, dahl sheep, grizzlies, wolves, and moose. National Geographic anyone? At the end of the day we sent my brother home with some fresh salmon, and got ready to leave for Homer the next morning.

The next day we drove back down the parks highway towards Anchorage and eventually down the coast to Homer. We got sidetracked for about an hour as the clouds actually lifted and Mt. McKinley, showed itself. A rare occasion. The rest of the drive was incredible. The highway drives by the Kenai, the famous king salmon river, numerous glaciers and jagged mountain peaks. Once in Homer, we met up with my parents who had come up to visit my brother for a week. My dad and I overlapped our vacations so we could fish in Alaska together. The next two days were spent halibut and salmon fishing with North Country Charters. I hadn’t been deep sea fishing in many years, and it was awesome to get out there with my dad again. They clean and freeze pack your catch and we came home with tons of fresh halibut and salmon fillets. I definitely would like to visit Homer again. Tip: If you go, eat at Captain Patties on the wharf. My wife and I are always looking for quality and quantity, and this place definitely has it.

Black Wolf Crossing
Posted by SIERRA FLYSWATTER at 10:01 AM No comments: 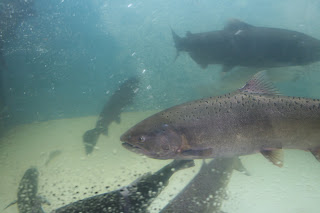 Last fall I had the pleasure of visiting northern California's Trinity River hatchery. It was admittedly my first visit to an anadromous fish facility. Here they raise both Chinook and Coho Salmon and of course Steelhead. Fish are "milked" two days a week and the fertilized aftermath are carefully raised into fingerlings before being released into the river.

Gramps and I spent about an hour walking the ladders and eavesdropping on all the one's that got away through the polarized viewing window. If you're ever in the area I highly recommend checking this place out. The reality of dams make well designed and managed facilities like this essential to ensuring the future of our precious California coastal species. 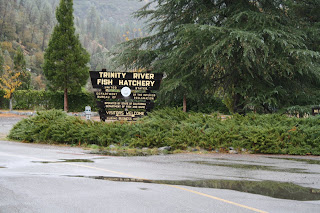 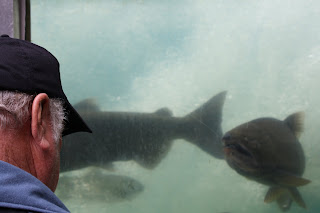 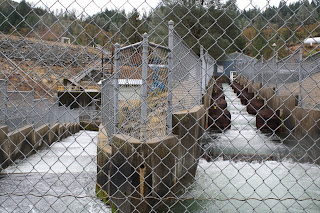 Posted by SIERRA FLYSWATTER at 11:50 AM No comments: 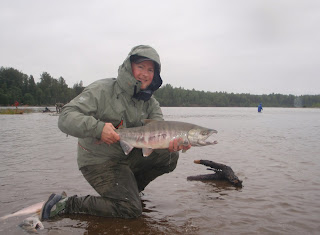 So our last blog ended with us disembarking from the MS Oosterdam. After spending the day at Jean’s house (Angela’s roommate when she worked in Seattle) we boarded the Alaskan Airline’s flight back up to Anchorage, AK. We picked up our rental car and promptly got lost finding our way around the city. The next day after picking up supplies at the nearest Fred Meyer, we set our sights along the Parks Highway north to Talkeetna. The scenery was absolutely amazing - we had a such a hard time keeping our eyes on the road - and were a little skittish due to the strict rental car agreements. (I have a tendency to pull off on any dirt road I think leads somewhere.)

As we pulled off the highway onto Talkeetna spur rd. we scoped out many a clear water tributary to the Big Susitna River which we followed up the road. After finding where we would be staying we checked out the little town of Talkeetna AK. In town there’s a small brewery, a few restaurants, and some tourist attractions that all rely on some sort of Susitna river recreation. We ate dinner at the West Rib and got the best in fresh salmon and seafood.

Immediately my wife and others began to hook up. I was still swinging flies and continued to have problems catching fish. I then began to think of these fish as river fish and looked for structure for which they could take refuge. My first cast behind a current blocking sweeper produced a huge silver flash which was the only time I saw the identity of what was on my line. After fighting the beast for at least 10min he popped off. I’ve never been frustrated, as this was my first big hookup on a real Alaskan silver. The next cast produced nothing. Then WHAM! A big Coho at the end of my line. I got my wife’s attention and eventually led him downstream to an island to land him. We were both ecstatic - despite our catch and release ethic, this fish was to feed us for at least part of the week as we hadn’t bought too many provisions on our trip. Soon after, fish after fish hopped onto our lines - we had a blast catching 3 species of pacific salmon. We had caught the run perfect. Pink, Chum and Coho. To us lower landers this was bliss.

Enjoy the pictures part #3 Denali and beyond is coming soon. 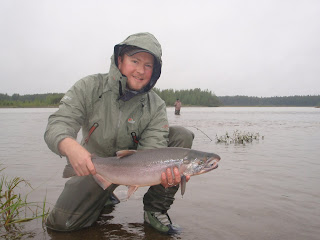 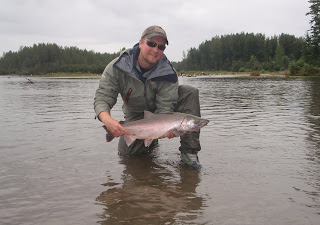 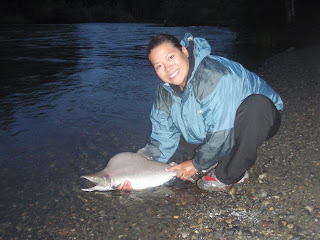 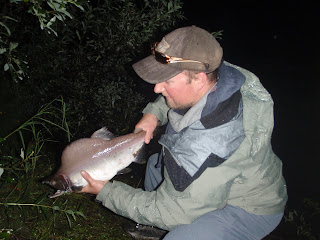 Posted by SIERRA FLYSWATTER at 1:28 PM No comments:

OTHER BLOGS TO CHECK OUT

SIERRA FLYSWATTER
Welcome to the Sierra Fly Swatter fishing blog. Our intention is to provide compelling and informative content regarding the world and culture of fly fishing. Based out of Reno, Nevada our home waters include of course the Truckee River and Pyramid Lake as well as the Sierra Nevada Range as a whole and far beyond. We hope to hear from you. Please send us your comments, suggestions,hate mail and recommendations.